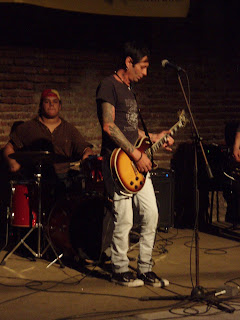 SLATES is honoured to have had the opportunity to play with a band called ESKORIA. Eskoria is held very dear in the hearts of the Cuban rockers and punkies.

Based out of Santa Clara, Eskoria is one of the original punk rock bands of Cuba. The band is fronted by William Fabian who is regarded as the godfather of the Cuban punk scene.

The show in Santa Clara really set the tone for our tour in Cuba. The energy at the show reminded us of the all ages punk shows of our youth. Eskoria’s performance was incredible. A Cuban slam broke out at the onset of the show and Eskoria delivered a powerful cover of “Anarchy in the UK”.

After SLATES played William Fabian was very emotional and moved by our music. He told us he never thought in his lifetime he would ever get to experience a foreign band playing the real punk in his hometown. He said we had made his dream come true.

He kept repeating to me and James “Fuck you mang! Fuck you mang!” which as his wife explained he thought the F-bomb is a good word and was trying to tell us how awesome our band was.

On our way to the airport, we stopped at the park in Santa Clara to say goodbye to some friends and present William Fabian a copy of the SLATES lp. 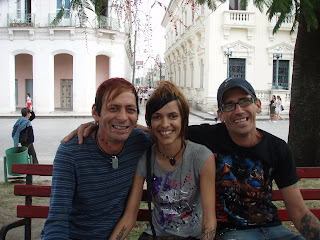 Eskoria played a concert in Santa Clara 4 days later. After the concert, William Fabian was killed outside the venue as he tried to stop a fight.

Our hearts go out William Fabian’s family, Eskoria, Santa Clara, and our friends in Cuba.

Tomorrow would have been William Fabian’s birthday.
Tonite…SLATES, Falklands, & Peace Maker are playing in Edmonton.
There is also a concert being held in Santa Clara.
We celebrate the life of William Fabian.
We rock in solidarity with our brothers and sisters in Cuba.